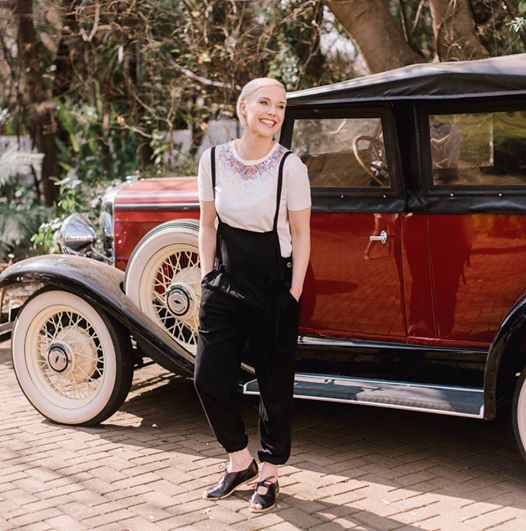 You might recognise her from the silver screen or from plenty of local glossy magazine covers. Style, grace and LOADS of talent to boot – Mandi Baard is a South African actress that we just adore! The best news? She loves Blu Betty right back!

Getting to know Mandi Baard

Mandi Baard has loads – and we mean loads – of impressive skills and titles to her name. Freelance actress, TV and radio presenter, voice artist, MC, motivational speaker and Blu Betty Superfan are just a few! Some of Mandi’s most known roles include Lara in SA favourite soapie Egoli, Elna in 7 De Laan and most currently, Lienke in the highly popular kykNet drama, Getroud Met Rugby. She’s featured in films such at 2015’s Sink and been a part of local TV gems like foodie show KampKos. You’ll even see her play the role of presenter extraordinaire in Skole Kook. One thing’s for sure – whatever role she tries her hand at – she excels at it!

This multi-talented woman can act, sing and dance but BOY can she rock a pair of Blu Betty shoes! We’re so lucky to be on the receiving end of such awesome brand love from Mandi, making it only fitting that we got her on board as one of our official Blu Betty ambassadors!

What makes Mandi such a standout personality for us here at Blu Betty, is the warmth, beauty and vibrancy that she radiates – both inside and out. A graduate from the University of Stellenbosch, Mandi has gone on to excel in the acting world and has used that experience to give many motivational talks. She uplifts and inspires the communities around her and we appreciate her even more for her kind and giving spirit!

Mandi took time out of her busy schedule to pop into our stall at Decorex JHB during August – thanks for visiting Mandi and thanks for sharing the Blu Betty love!

Want to know more about Mandi? Of course you do! Follow her on Instagram and Facebook. Spoiler alert – You’re sure to see a tonne of pics with her and her favourite pairs of Blu Betty shoes 😉

Get the latest updates from the COVID-19 South African resources portal here.

We use cookies on our website to give you the most relevant experience by remembering your preferences and repeat visits. By clicking “Accept All”, you consent to the use of ALL the cookies.
Reject All Accept All
Manage consent

This website uses cookies to improve your experience while you navigate through the website. Out of these, the cookies that are categorized as necessary are stored on your browser as they are essential for the working of basic functionalities of the website. We also use third-party cookies that help us analyze and understand how you use this website. These cookies will be stored in your browser only with your consent. You also have the option to opt-out of these cookies. But opting out of some of these cookies may affect your browsing experience.
Necessary Always Enabled
Necessary cookies are absolutely essential for the website to function properly. These cookies ensure basic functionalities and security features of the website, anonymously.
Functional
Functional cookies help to perform certain functionalities like sharing the content of the website on social media platforms, collect feedbacks, and other third-party features.
Performance
Performance cookies are used to understand and analyze the key performance indexes of the website which helps in delivering a better user experience for the visitors.
Analytics
Analytical cookies are used to understand how visitors interact with the website. These cookies help provide information on metrics the number of visitors, bounce rate, traffic source, etc.
Advertisement
Advertisement cookies are used to provide visitors with relevant ads and marketing campaigns. These cookies track visitors across websites and collect information to provide customized ads.
Others
Other uncategorized cookies are those that are being analyzed and have not been classified into a category as yet.
SAVE & ACCEPT
Create a new list